The Gosnell trial has been bringing news of safe and legal abortion deaths to the forefront. With this attention, of course, comes the standard abortion-rights assertion that the bad old days of illegal abortion were worse.


In a way, they're right. There were far more abortion deaths, and maternal deaths in general, in the decades before legalization. They're just dead wrong in where they place credit for the spectacular 20th century fall in maternal mortality.

I bring you Maternal Death Rates in America in the 20th Century:

This is all maternal deaths, from abortion, miscarriages, ectopic pregnancies, complications of childbirth, and so forth. You can see that the 20th Century got off to a good start, improving maternal health, but that trend would later level off, and then reverse itself temporarily, before taking the downward trend that would continue for the rest of the century.

Let's look at it again, but this time I'll put a vertical line at Roe vs. Wade, so we can see the clear, unmistakable, undeniable, staggering and spectacular impact ready access to safe, legal abortion had on maternal mortality: 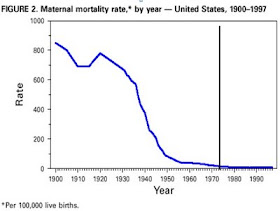 For those of you with a faulty sarcasm detector: Roe didn't even amount to a blip on the line.


For those of you who get your information from abortion lobby "fact sheets" this might come as a bit of a shock. You're accustomed to being told things like: "The legalization of induced abortion beginning in the 1960s contributed to an 89% decline in deaths from septic illegal abortions (15) during 1950-1973." (Courtesy, in this case, of the Centers for Disease Control -- for those of you who had any doubts as to their abortion-praising agenda.)

Let's look specifically at abortion mortality, to see the profound and clear and unmistakable impact of legalization. I marked vertical lines at 1970 (when New York and California became the first states to legalize abortion on demand) and 1973 (when Roe vs. Wade legalized abortion on demand nationwide). 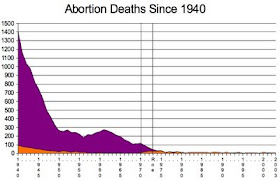 If you're having a hard time spotting it, I'll zoom in a bit on abortion deaths since 1960. Note that I marked New York and California's legalization and Roe vs. Wade for you: 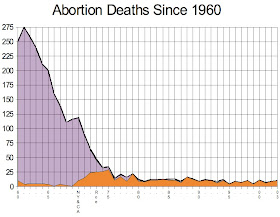 The things put forth by abortion advocacy organizations leave you with the impression that improvement in maternal health in general, and abortion mortality in particular, must be due to the ready availability of legal abortion. But if you look at maternal mortality, as we just did, and look at the legalization of abortion, as we just did, you can see that the dramatic and very laudable drop in maternal death in the 20th Century was achieved with no help whatsoever from the abortion lobby.

To whom is credit actually due, if it is not due to abortionists and abortion agitators? Let's look at some factors. 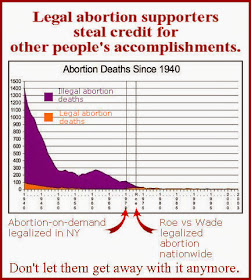 1. At the turn of the century, many maternal deaths were due to one sad factor: inadequate childhood nutrition. Inadequate calcium and vitamin D, especially for city children, caused rickets. This meant that women who developed rickets as children had small and/or malformed pelvises. This caused obstructed labor, a major contributor to high maternal mortality. (This problem persists in developing nations.) In the developed West, the problem of obstructed labor has been virtually eliminated, along with most nutritionally-related complications of pregnancy and childbirth. For this, we should thank: